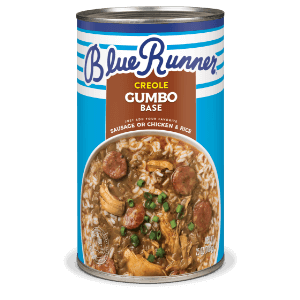 In Louisiana, we don’t throw away our turkey carcasses after Thanksgiving or Christmas. We hold onto those otherwise discarded bones for leftover turkey and sausage gumbo! Those in the know, however, know that there’s an even better–not to mention faster–way to get that rich gumbo flavor. You use a jarred roux and Blue Runner Creole Chicken and Sausage Gumbo Base. This recipe will save you the extra thirty minutes of stirring on a lazy day.

In a large, heavy-bottomed pot over medium heat, add the vegetable oil, onions, celery, and bell peppers. Stir slowly and constantly to keep the vegetables cooking until they are wilted, about 5 minutes. Season with salt and cayenne pepper. Add jarred roux stirring continuously until it dissolves.

Stir in the smoked sausage and bay leaves and continue to stir for 2 to 3 minutes.

Pour in the Blue Runner Creole Chicken and Sausage Gumbo Base and stir until the base and roux mixture are well combined.

Bring the gumbo to a boil, then reduce heat to medium-low. Cook, uncovered, stirring occasionally, for 1 hour.

Stir in the turkey and the filé powder; simmer for 20 minutes.

Skim off any fat that rises to the surface of the gumbo; remove from heat.

Stir in the parsley and green onions.

Remove the bay leaves and serve the gumbo in deep bowls with rice or in this case, potato salad.

Potato Salad
Place potatoes in a large pot, cover with cold water by an inch. (If you haven’t already hard-boiled the eggs, you can boil the eggs with the potatoes.) Bring to a boil and add about 2 Tbsp of salt. Lower the heat to a simmer and cover. Cook until the potatoes are fork tender, about 14 minutes. Drain in a colander.

While the potatoes are boiling, mix the sugar, vinegar, mayonnaise, hot sauce, and mustard.

While the potatoes are still warm, gently mix them in with the dressing. Stirring them in while warm will allow the potatoes to soak in the seasonings better.

Gently fold the chopped hard-boiled eggs into the potato mixture until well combined. Sample the potato salad and add salt and pepper to taste.

Put the salad in the fridge for at least twenty minutes before serving.Serve chilled, garnished with paprika or Cajun seasoning.