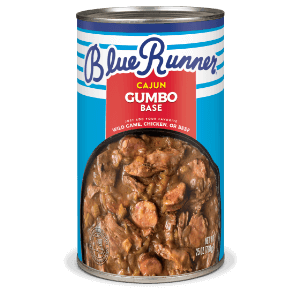 If you’re from New Orleans, this is your grandmother’s pot roast! Normally this version of French Daube takes longer to make than your typical pot roast but, when you start with Blue Runner® Cajun Gumbo Base, you can cut time without cutting flavor. You can literally set it and forget it.

Fun fact: According to the history books, Daube originated in southern France near Spain and–get this–bulls killed in bullfights were butchered and often used for this dish. They called it Daube because It was cooked in a daubiére, a pot with a narrow neck that increases condensation.

Preheat the oven to 275 degrees F.

Pour oil into a large oven-safe pot over high heat. Season the chuck roast with salt and black pepper. Brown the meat on both sides in the hot oil, then lower the temperature to medium-high.

Add onion, garlic, and celery into the pot. Cook while stirring often, until vegetables start to release their juices, about 3 minutes.

Loosen any brown flavor bits on the bottom of the pot, then add the Blue Runner® Wild Game Base.

At this point, you can add the carrots, potatoes, and bay leaf. Stir and make sure the chuck is three fourths of the way covered in liquid. Season to taste if needed. Cover the pot.

Roast in the preheated oven until the chuck roast is tender, about 2 ½ to 3 hours.

Serve with your choice of side or on top of rice or mashed potatoes, garnish with green onion.