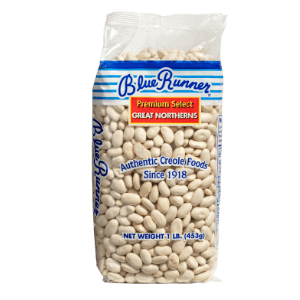 There’s much ado about all things pumpkin spice this time of year, but what we get really excited about is butternut squash, which has a sweet, nutty taste similar to pumpkin. In fact, in Australia and New Zealand, it’s called a butternut pumpkin. Roasted with Blue Runner white beans, cauliflower, Brussels sprouts, pomegranate arils, mulberries, and other good stuff, and served with a zesty horseradish dressing, this recipe is ideal as a Thanksgiving dinner side or on any night you want to impress your tastebuds.

Rinse and cook the beans using whichever method you prefer. We cooked these in the instant pot, set to high pressure for 36 minutes, with a 20-minute release. You’ll only need about half of the beans for this recipe, so we recommend either doubling this recipe to feed a larger group or using those beans in another recipe.

Heat the oven to 400 degrees. Toss the butternut squash, cauliflower florets, and Brussels sprouts in the olive oil, then season with paprika, cumin, salt and pepper. Roast for 15 minutes, until the cauliflower and Brussels have a little color but aren’t soft all the way through. Remove from the oven and set aside to cool.

Make the dressing by combining the vinegar, garlic, ginger, mustards, cane syrup, green onion, salt, and pepper in a small mixing bowl. Using a large whisk, stir the mixture rapidly while drizzling in the olive oil, until it’s full emulsified. Alternately, you can use a stick blender to combine all of the ingredients.

Transfer the roasted vegetables to a large mixing bowl. Fold in the pomegranate, dried cranberries, and chopped kale. Drizzle the dressing over the mix and stir with salad tongs or by hand to coat everything evenly.

If adding goat cheese, break that into chunks and gently fold into the dressed salad.

Note: This dish is very versatile—you can swap in other vegetables, like broccoli for the cauliflower—just keep the ratios the same.