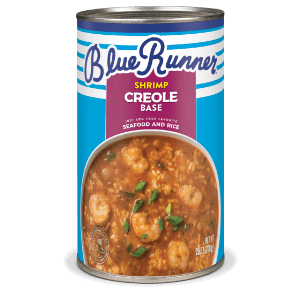 Even Blue Runner Navy Beans aren’t navy blue so how did this white bean get its name? You guessed it. They were a staple in the diet of the U.S. Navy in the early 1900s. When called, they also answer by haricots, pearl haricot beans, Boston beans, white pea beans. or pea beans. Another thing you should know: with 19 grams of fiber in every cup, navy beans have more fiber than any other bean.

So next time you stroll by the seafood counter at the grocery store, pick up 8 to 10 shrimp with their heads and tails on and get ready to impress your family or guests. Like Shrimp & Grits, it’s perfect for brunch.

Heat a large, deep skillet over medium-high heat. Add the oil to the skillet and swirl it around. Add the onion, salt, and pepper and cook for 5 minutes, or until onion is slightly golden. Cover the skillet, reduce the heat to low, and cook the onion for another 5 minutes, or until soft and beginning to brown. Stir in the garlic and cook, uncovered, until fragrant, about 3-4 minutes. Add the thyme and cook for 2 minutes.

Add the beans to the skillet, along with the Blue Runner® Shrimp Creole Base and a little water, if needed. Raise the heat, bringing the mixture to a boil. Reduce the heat to low, cover the pan, and simmer for 5 minutes. Remove the lid and cook for another 5 minutes, or until the mixture is creamy and the beans are very soft. You can crush some of the beans with the back of your spoon or a potato masher if you’re looking for an even creamier texture. Stir in the apple cider vinegar, crystal and more salt and pepper, to taste.

While the beans are cooking, marinade the shrimp in a bowl using 1 clove of garlic grated through a micro plane, the zest and juice of one lemon, more olive oil, salt, pepper, and chili flakes. Set bowl aside until the beans are cooked and cooling down.

In a cast iron sauté pan over high heat, place about one tablespoon of olive oil. Once it is hot and smoking, add the shrimp.

Sear on high heat on both sides until they char, and crisp up, turning red–only about one to 2 minutes on each side. Reduce heat to medium and add butter to finish cooking for another two minutes.

Line up the whole shrimp over a bed of the creamy beans and pour the butter from the pan over them, finishing with dashes of Crystal as desired. Garnish with chopped parsley.